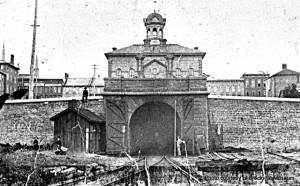 The History of the Brockville Railway Tunnel

CHECK OUT THIS VIDEO MADE PRIOR TO OUR GRAND REOPENING

Although little known, the oldest railway tunnel in Canada actually exists under the downtown core of Brockville, Ontario, the tranquil community located on the shores of the St Lawrence River at the eastern edge of The Thousand Islands.

The tunnel was built between 1854 and 1860 to allow the fledging Brockville and Ottawa Railway to connect the Brockville industrial waterfront area to the outlying areas lying between the St Lawrence and Ottawa rivers.

Samuel Keefer; who at age 30 had been appointed to the highest engineering position in Canada, the first chief engineer of the Board of Public Works of the United Provinces, was opposed to the tunnel project. He recommended the rail line run around the high grade of the community and simply come down to the river from a westerly direction thus avoiding the hill. However, the philosophy of the Canadian railway builders seemed to be based on the belief that no railway was complete without at least one tunnel. The council of the day and the citizens of Brockville seemed to agree and pledged their support to the building of the tunnel under the city for a direct access north.

Supported by grants from various communities on the proposed route, the Brockville & Ottawa Railway Company entered into a contract in 1853 with the firm of Sykes, DeBergque & Co to construct a rail line. By April 1854, sixty miles of right-of-way had been cleared. In August of 1854, work on the tunnel beneath Brockville began, by English sub-contractors John Booth and his son David, following a grand opening ceremony, with full masonic honours.

In 1855, the firm of Sykes, DeBergque & Co. encountered financial difficulties and was unable to continue construction of the railway without considerable assistance from the municipalities. Without such assistance forthcoming, work was suspended. Then in 1856, further funds were advanced by the municipalities and the firm of Dales & Co was contracted to complete the road. Meanwhile angry debates raged in Brockville’s town council. Some wanted the tunnel completed and others wanted a less expensive western entry to the waterfront. In the end, the citizens of Brockville voted in favour of the tunnel and the sub-contracting firm of Brown, Row & Co. was contracted to complete the work.

Finally on December 31 of 1860, the first small train, a wood-burning locomotive and two coaches came through the completed tunnel and the tunnel was officially open for traffic. The Brockville and Ottawa Railway went on to greater things reaching Sand Point on the Ottawa River in 1867, which remained the northern terminal for many years until later when the line was carried further up the Ottawa river.

The Brockville tunnel is arch-shaped, measuring 14 feet 9 inches from the top of the arch to the ground and 14 feet across. The overall length of the tunnel is 1721 feet in length and passes right under Brockville City Hall. The tunnel contained a single track when operational. The bottom and top thirds of the tunnel are completely lined with stone held together by water lime. The centre third of the tunnel is unlined, with the craggy rock still exposed and dripping water resulting in colourful mineral deposits in interesting formations along the walls.  At each end of the tunnel portals made of limestone were constructed, with the southern portal being more extensive than the north. The tunnel possesses unique wooden doors at the north and south portals which are opened each day and closed at night. In the early years the doors prevented stray animals from wandering into the tunnel, but now give access to residents and tourists to view the very south portion of the tunnel.

The small cross-section of the tunnel necessitated the use of small-scale locomotives. As more modern rolling stock was being developed, two small J-Class 2-6-0 engines, Nos. 3011 and 3063 were specially maintained for use through the Brockville tunnel until 1954. Diesel-shunting locomotives then took their place for the final years of service, with the last use being in 1970.

The City of Brockville acquired the tunnel as part of a waterfront land deal between the City and the Canadian Pacific Railway. Although the tunnel has remained idle for many years, upgrades to the north and south portals have been completed by the City of Brockville and some 80 feet of the southern end has been renovated so that visitors can view the tunnel’s interior during the summer months.

A committee of Brockville’s City Council has been active since 2011 with the goal to open the tunnel end-to-end for residents and visitors and to eventually see the tunnel and its north gorge area connected as part of the Brock Trail system. Renovation construction started August of 2016 and continued throughout the winter, spring and summer of 2017. The Tunnel opened with a parade and opening ceremonies on Saturday, August 12, 2017 as part of the City’s Rails to Trails as its Canada 150 celebrations. Work continues in the north gorge area and Phase II plans are being considered for the development of the old railway lands beside and just west of the gorge.

Despite its tumultuous history, the Brockville Railway Tunnel is the first railway tunnel in Canada and as such, worthy of recognition.